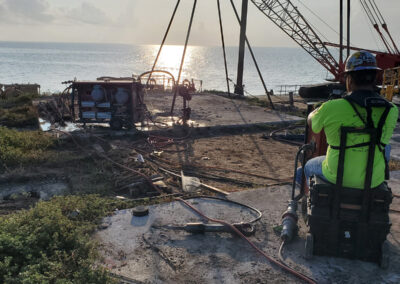 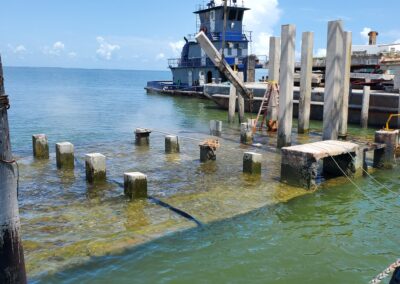 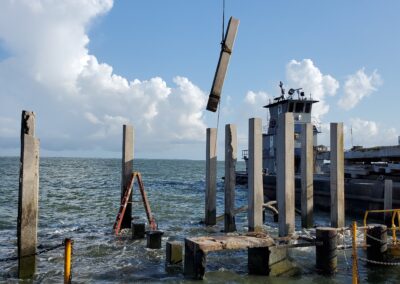 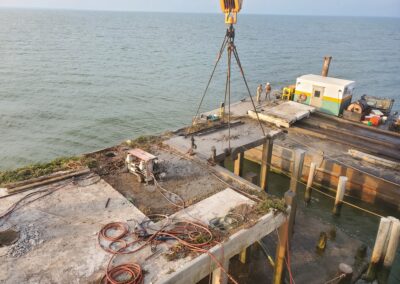 Holes Incorporated always goes the extra mile for their clients, but in the case of the Trinity Bay Offshore Platform Decommissioning project, Holes went the extra ‘nautical’ mile!  This highly specialized, unique project had the team planning, strategizing, and mustering in less than 72 hours to initiate and execute this complex offshore decommissioning.

To properly decommission an offshore platform, 10 rigorous steps must be taken to ensure environmental and crew member safety. Those steps include project management, engineering, planning and permitting, regulatory compliance, platform preparation as well as well plugging, conductor removal, transport and dismantling.  To prepare a platform for decommissioning, tanks, processing equipment & piping must be flushed and cleaned, and residual hydrocarbons properly disposed of. All platform equipment must be removed which includes cutting of pipe and cables between decks, and reinforcing the structure when needed to safely make the journey back to shore.

This decommissioned platform sat thirty nautical miles offshore in Trinity Bay. The massive platform had a sub-sea floor which was 12-feet underwater, and an elevated floor which sat 15-feet above water. After analyzing the condition of the barge, the general contractor Laredo Construction had deemed the decommissioned platform unsafe and a hazard to boat traffic if moved, in whole, due to its deteriorating state. For Laredo to safely float the barge back to shore, they needed to bring the highly skilled services of a concrete cutting contractor like Holes Incorporated to the offshore platform, and task them with cutting and removing the second story platform as well as cutting 40 supporting concrete piles. By removing the platform’s second story, the overall height and weight would be reduced and the barge could arrive safely to the Houston Ship Channel.

Laredo reached out to Holes Incorporated for project assistance on a Friday afternoon, at 2:00pm, with a seemingly impossible request – to be onsite by Monday, a less than 72-hour turnaround.  As highly capable problem solvers, Holes accepted the challenge and began assembling a wire saw team, acquiring proper maritime insurance requirements, working with their new client on an MSA, and developing a plan of action – all over the course of one weekend.

Holes tapped their Field Training Supervisor, Bryan Cheek, to lead this job accompanied by wire saw apprentice, Luke Buchanan. Both men promptly wrapped up a previous job they were working on, to ready themselves for this offshore challenge.  To arrive prepared for the job, many tasks had to be meticulously orchestrated.  Holes’ Field Safety Supervisor, Nolan O’Neil, stocked equipment trailers with necessary tools, plus additional provisions as needed, since the work would be done offshore and additional supplies would not be easily available. With trailers loaded, Cheek and Buchanan headed to the Port of Galveston to transfer the Holes trailers to Vessel Triton, Laredo’s equipment transport ship, which made the 30-mile voyage to the platform.

Upon arrival to the platform, Cheek and Buchanan introduced themselves to the contracting team and inspected the platform.  After temperatures were taken and additional COVID related health precautions were discussed and in place, a Holes – Laredo Team meeting occurred to review the plans of the structure and solidify a strategy to safely deconstruct the platform. Measurements of the structure were taken, and weights were calculated to ensure the structure would be cut into appropriately sized pieces.  During the meeting, Cheek discussed the equipment, how it operates, and potential hazards, along with the Holes plan for safely cutting and removing the structure. Once this was complete, Cheek and the Laredo project manager decided that for safety reasons, a test lift would be completed.  A test lift was initiated to prepare the crane and barge for the potential lifts of the structure and to ensure the structure would not flip over during the dismantling. The structure was clear of any personnel and equipment prior of the test lift. After the successful completion of the test lift, the Holes – Laredo team went to work.

As with any offshore work, there are inherent hazards and safety concerns.  Cheek started every day with a safety meeting and a JSA. He walked the deck and checked the premises to make sure everything was in order for the day ahead. During the morning safety meetings, a plan was discussed to work safely by establishing ways to communicate with each other during the job. With Cheek’s industrial experience he recommended the use of blow horns to alert the Holes team if something was wrong and discussed scenarios in which to blow the horn and initiate stop work authority. Walkie talkies were also used between all personnel to remain in contact with the Holes – Laredo team at all times.

Buchanan conducted Toolbox Safety talks each morning with the crew to review all the potential hazards of the wire saw, the hazards of working over water, slips, trips, and falls, and how to safely work alongside a crane. Since they were working over water, PPE such as ANSI Cut Level A5 Impact gloves, Coast Guard-rated life jackets along with safety glasses and hard hats were attached to each person by tool lanyards and were worn 100 percent of the time on the structure.

Now came time for operators to begin deconstructing the platform. A Hilti WS-15 wire saw with DDM Concut 10MM wire was used to perform the job. The concrete roof structure was cut into four equal sections weighing at approximately 75,000 pounds each. An API 100-ton crane was securely attached to each piece prior to cutting and removing to ensure that zero concrete debris would fall into the water. The crane was then used to lift the pieces off the platform and placed onto another barge that would bring them to shore to be unloaded at the end of the job. Within a span of three days, the operators were able to cut and remove all four sections of the upper deck, and 40 columns.

Throughout the job, the operators were faced with numerous obstacles they had to overcome. Since they were on water, the structure was wet and slippery at times due to algae growth. During high tides, they were unable reach the bottom of the barge, which limited their ability to cut. Additionally, the concrete was covered in barnacles, and one fall would result in cuts and scrapes therefore non-slip, waterproof steel toed and soled work boots were worn to help mitigate the hazard of slipping, tripping and falling. On top of that, wind gusts in the middle of the bay can be very strong, so team members had to be keenly aware to avoid being blown onto the barnacles while walking across the concrete. Each footstep was planned and each movement watched to ensure that everyone stayed safe on the platform.

During the actual cutting time, the structure was clear of personnel. A single man basket was used to transport personnel and limited tools to the structure to set up the wire saw, run the wire and prepare the cuts. The man basket would then be used by Holes personnel to watch the cutting from a distance to ensure the accuracy of the cuts and signal to the saw operator when to stop the wire saw when cutting was complete. The wire saw is operated by remote control allowing for safe distancing from the hazards of the structure and the saw. After each cut, the team had to immediately remove the concrete and place it onto the load and haul barge to prepare for the next step of the project.

Upon job completion, Cheek and Buchanan loaded up their equipment, and once again Stepanski picked up the operators from the vessel via his personal fishing boat and brought the men back to shore by 5pm that Friday evening. In total, the upper deck which was removed weighed 300,000 pounds and measured 30’ x 50’. Additionally, the 2800-pound piles which were also removed resulted in a total of Holes cutting and removing 412,000 pounds of concrete.

Despite the challenges, Holes was able to mobilize, and safely execute this unique assignment. Within a record amount of time, Holes’ leadership created a project plan, obtained Maritime Insurance overnight, and transported two operators and all of their equipment to the middle of Trinity Bay with just a weekend at their disposal. The operators, Bryan Cheek and Luke Buchanan, were able to safely execute the deconstruction of the decommissioned platform while ensuring the safety of everyone on board and overcame unfamiliar obstacles. The job was completed in four days with zero incidents, accidents, or fatalities. Also, as a result of this project, Buchanan, the apprentice, completed his training program and achieved journeyman status upon project completion.  Laredo Construction contracted with Holes Incorporated because they knew they were the best in the business, and their reputation preceded them. Holes is celebrating their 50th anniversary this year, and this job is another example of the company’s dedication to safety, efficiency, and teamwork.